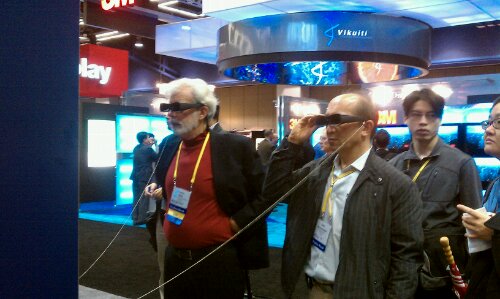 From the tone of the SID 2010 keynote from Sang-Soo Kim, VP of Samsung Mobile Display, the company is betting the public’s interest in 3D television will help create a market for bold and beautiful OLED displays*.

In the talk, Kim contrasted the 3D capabilities of active-matrix OLED (AMOLED) displays with those of LCDs, in particular playing up the fact that the “fast response” time of AMOLEDs is “a great benefit for 3D TV applications.”

I have mixed feelings about OLED displays and 3D being so closely tied together. While it’d be great to finally have affordable OLED screens–a technology that has been promised for years– I’m less than enthusiastic about the industry’s push for 3D.

I’ve tried 3D and don’t like it; something about it just doesn’t jive with my visual system, but that’s my personal issue. My objective concern in tying OLED displaysto 3D is that both  products and markets are untested. If 3D TVs don’t take off, what happens to the promise of OLED displays?

Even without the nose-punch gimmicks of 1950’s 3D films and with the advances in optics technology, there’s still reason to suspect that the 3D novelty will wear off, especially considering it makes some people physically ill.

From a Reuter’s story:

And while new digital 3D technology has made the experience more comfortable for many, for some people with eye problems, a prolonged 3D session may result in an aching head, they said.

“There are a lot of people walking around with very minor eye problems, for example a minor muscle imbalance, which under normal circumstances, the brain deals with naturally,” said Dr Michael Rosenberg, an ophthalmology professor at Northwestern University Feinberg School of Medicine in Chicago.

He said in a 3D movie, these people are confronted with an entirely new sensory experience.

“That translates into greater mental effort, making it easier to get a headache,” Rosenberg said in a telephone interview.

Regardless of the success of commercial 3D displays, Samsung has still made meaningful plans for AMOLED production. It has announced a $2.2 billion investment for a generation 5.5 fabrication facility, the type of plant that deposits OLEDs on pieces of glass big enough to make multiple laptop- and television-sized displays. According to Kim, the new facility will start mass production in 2011.

But to truly drive down the price of OLED displays and make them mainstream, manufacturers must produce a higher yield, which requires making more displays on larger pieces of glass. This will only come with generation 8 and 10 factories, and these are still years and billions of dollars of investment away. Samsung’s Kim is optimistic, though, and proclaimed, to the excitement of many attendees at SID2010, that AMOLEDs would be “mainstream technology for premium televisions by 2015.” I just hope forecast holds, with or without the success of 3D.

*Some background on OLEDs: Organic light-emitting diodes were discovered in 1987, and first commercialized ten years later. They can be used to make ultrathin displays that are extraordinarily bright with whiter whites and darker darks than other types of screens. In an OLED display, each pixel emits its own light, as opposed to an LCD screen in which a backlight shines through some twenty layers of optics and filters to produce light.

The problem with OLEDs is their manufacturing. There have been some technical challenges in scaling up OLED displays to the size that makes it cost effective to invest billions of dollars in their production. Because of this, OLEDs are only used in mobile phones and slightly bigger form factors like this expensive  11-inch Sony display.